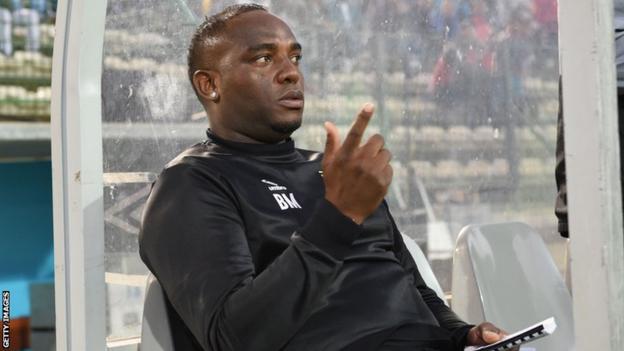 South Africa’s all-time leading goal scorer Benni McCarthy has admitted he would consider being the next Bafana Bafana coach.

McCarthy, 43, is currently in charge of Premier Soccer League side AmaZulu, his second coaching job in South Africa after beginning at Cape Town City.

“As a former player and a manager now you would want to be in charge of the best teams in the country where you are managing,” the former Ajax, Celta Vigo, Porto and Blackburn striker told BBC Sport.

“If that comes with the responsibility of taking your national team that’s been struggling – it is something that I wouldn’t rule out.

“As much as I love the day-to-day antics about managing players working on a daily basis and improving them my national team is struggling so if there is a chance for me to take the reins and take the South African job I would think about it.

“I would really think hard about it because nothing would make me prouder than to manage my country and qualify us to a World Cup tournament.

“That would be one of the highlights of your managing career even though it is such a short space of time but it is something that I am thinking about and would consider if the opportunity comes.”

South Africa, who beat hosts Egypt at the 2019 Nations Cup finals to reach the quarter-finals, missed out on next year’s tournament in Cameroon as they lost 2-0 in Sudan in their final qualifier.

As well as the South Africa job McCarthy is also dreaming of coaching in England in the future.

“After playing there I have had that taste of what the best league in the world is about and what is required of you so that is mouth-watering and that is my biggest desire.”

This Ecuadorean city in the Andes has perfect weather — and you can retire there for as little as $1,500 a month

Eighteen dead in mass break-in to Spanish enclave of Melilla