Whistles screech on the sea breeze as three female Somalian coaches inspect a line of women in black and blue headscarves dribbling basketballs.

It is not just the heat that makes it hard: The women are also braving the scorn of their families and the threat of attack by gunmen who think women should not publicly play sports.

“We cannot openly say we are going to play. We put our playing clothes and shoes in school bags and carry them that way to the field and we pretend we are going to school or university,” said Fardawsa Omar Ahmed, 20, a university graduate who also plays volleyball and football. 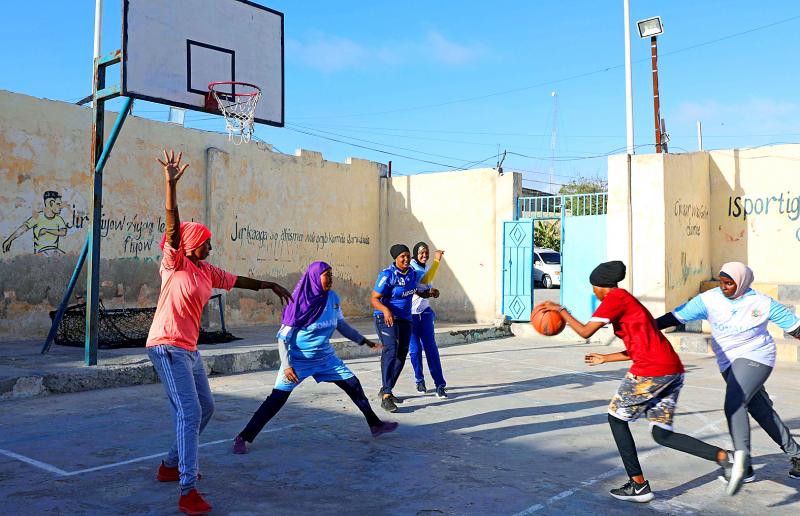 Her family used to discourage her from playing, but now they accept it, she said.

The women only play in compounds behind high concrete walls, which shield them from the gaze of the curious or those who might attack them.

One of the coaches, Suham Hassan Sobran, 40, played as a child before civil war broke out in Somalia in 1991.

She restarted in 2009, when the Islamist al Shabaab insurgency still controlled large swathes of the city.

Sobran and her two friends train about 30 other women on a court enclosed in Mogadishu’s Hamar Jajab district office.

A police checkpoint lies nearby — such checkpoints are often a target for al Shabaab, which was driven out of Mogadishu in 2011, but still mounts frequent attacks.

On the court’s gate is a painting of a woman playing basketball and slogans promoting good sportsmanship.

Another of the coaches, Faduma Ali Abdirahman, 39, now a mother of six, once played on Somalia’s national team, traveling to Djibouti and Uganda for matches.

The women receive no funding. When they play matches, the trainers pool money to buy a cheap cup as a prize, but they love what they do, and dream of starting teams all over Somalia.

Comments will be moderated. Keep comments relevant to the article. Remarks containing abusive and obscene language, personal attacks of any kind or promotion will be removed and the user banned. Final decision will be at the discretion of the Taipei Times.

‘Workers don’t want toys or free food, they want a higher quality of life’: The Great Resistance is here — companies struggle to get workers back to the office