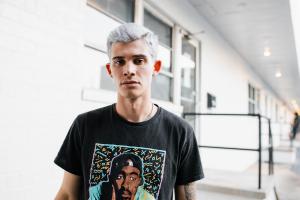 Joey Phantom – Joint and a Juicebox

Joined by his crew on the roof, they spend the day occupying themselves with the consumables mentioned in the title

LOUISVILLE, KY, USA, September 28, 2020 /EINPresswire.com/ — Louisville’s signature beverage, the Mint Julep, is a combo of bourbon, sugar, water, crushed ice, and fresh mint. None of that matters, though, because you’re not going to find Joey Phantom anywhere near such a precious concoction. The rising star in Louisville hip hop keeps it simple and keeps his recreational provisions in a shoebox under the bed. Louisville runs in his blood, but derives his style from influences far and wide; while Kentucky is known for giving us more than a few greats like Muhammad Ali, the state hasn’t set the national hip hop scene on fire just yet. That could soon change, with Joey Phantom’s recent string of singles turning heads. “Summertime” and “Killin Shit Again” were true bangers, but only hinted at what was to come with his latest, “Joint and a Juicebox.”

Simple pleasures. Nothing more, nothing less. Joey kicks an old-school, day-in-the-life narrative, creating a world where the only thing he takes seriously is not taking a whole lot seriously. The track was produced by Grammy nominee Illuid Haller, who played piano on Cordae’s chart-topping 2019 debut album The Lost Boy and mixed by Goods Producer and Jay Bump. A nice, slow finger-snap groove and mellow organ insist the listener slow down and enjoy the day; it’s an off-kilter melody sent from another dimension. Good vibes reign supreme in Joey Phantom’s flow, which floats about three feet high – and rising. A joint and a juicebox, because we don’t want to grow up, but we don’t want to be kids forever, either. Pop this in your earbuds up on the roof, grab your own bud and beverage, and forget about that for a while. While you’re at it, forget about everything else, too.

Just another 82-degree day, making moves in Louisville. Joey hops in his ride and heads out on the streets to handle his business. Things get weird when he passes his substance of choice to a pint-sized animated wizard in a pizza hat. No, that was not a typo, and that’s just the beginning. Back at home, he winds his way through his house, past sexy aliens (of course) and partying goblins (why not). The head-trip creatures lounging in his home, and the reality-distorting illustrations are courtesy of Tahj Mullins, author and artist behind the beloved children’s book “There’s A Moose On The Loose.” Joined by his crew on the roof, they spend the day occupying themselves with the consumables mentioned in the title. Suddenly his phone snaps him out of it — he’s alone, and his homies are on the line. The possibly bad news: he hallucinated the whole hang. The definitely good news: that’s for sure some pretty killer weed.


EIN Presswire’s priority is source transparency. We do not allow opaque clients, and our editors try to be careful about weeding out false and misleading content.
As a user, if you see something we have missed, please do bring it to our attention. Your help is welcome. EIN Presswire, Everyone’s Internet News Presswire™,
tries to define some of the boundaries that are reasonable in today’s world. Please see our
Editorial Guidelines
for more information.

Viewpoint: Why Ethiopia's Tigray region is starving, but no famine declared

U.S.-Canada border reopening to offer some relief for separated families

Viewpoint: Why Ethiopia's Tigray region is starving, but no famine declared

U.S.-Canada border reopening to offer some relief for separated families