Community Question: Ethiopia was the mother to ancient Egypt. Without Ethiopia, there never would have been an ancient Egypt as we know it. Why isn’t this acknowledged? 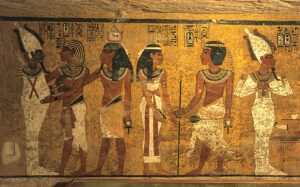 I think you need to do your homework. We acknowledge the fact that northern Africa was the birthplace but I don’t think it is as far as Ethiopia. Nubia perhaps. Of course there was inner marriage and colonization And people traveled all over the world just like they are now. Nobody stayed in their country all the time and there were many people born with wanderlust in their heart. These people traveled all over the world just as they do now. Egyptians have always been a mix. If you go towards Sudan, they are very dark and black, if you go toward the Mediterranean they are light skinned and they look more like Greek or Romans. Also, there was quite a bit of intermingling going on with the royal house since the kings married princesses from all over the world. One of the greatest pharaohs of ancient Egypt, Amenhotep lll Was actually partially black and also his mother was from ancient Syria which in those days was called Mitanni!

We also suspect that the beautiful queen Nefertiti could have been a princess from there which would explain her light olive skin. So stop trying to make Egypt 100% black Africian! Here is a DNA wheel for you to ponder. DNA does not lie! The Egyptian people are now what they were in ancient times, a mix. You can even see many scenes such as on one of the boxes of king Tutankhamen where he is fighting with what looks to be pure black African people and you can notice the complete difference in what he looks like. I am not saying that the Egyptians were Caucasians. But they were more olive skin with black hair.

Egypt experienced many conquests, colorizations and mass immigration across all of its extended history. Its complexion and ethnicity changed because of this. There were black and white Pharaohs during different time spans. The Pharaohs married many Foreign Princesses and had Bi-racial kids. However, before 1640 BC, Ancient Egypt started first with black Africans who were indigenous tribes to the Nile Valley located in Africa…then Egypt became multicultural…it’s not rocket science; The Black Kings existed from the start. 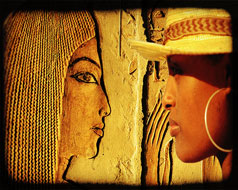 Ethiopia has been acknowledged as a brother to Egypt, Put, and Canaan. These brothers would come together and fight with Egypt against the western invaders. Later on, in history, during the New kingdom, they would have civil wars among the tribes.

Ham (Hebrew meaning hot, burnt, black) was part of the family of eight who survived the great flood. Descendants of Ham populated Africa and parts of Asia. The word Ham is believed to come from the word Khawm which means “black, hot, and burnt” in Hebrew. Ham had 4 sons. They make up the AFRO-ASIATIC FAMILY. The Bible stated that Ham and his sons, and their soon-to-be descendants lived and became the forefathers of the modern African continent, the modern Middle East, and the modern West Asia.

Look at this map showing the Table of nations. Cush is mentioned twice. Map of the Origin of Nations in Genesis 10 (Bible History Online) 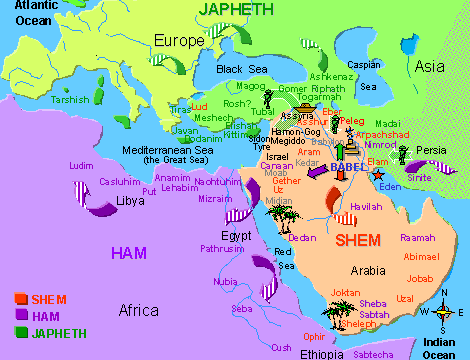 A. Cush – Nubians/ Ethiopians and Babylonians. Ethiopia’s borders at one time, stretched beyond the Red Sea, all the way to modern Yemen. Ethiopia, the land of Cush, was closer, both to India and Israel in ancient times before its borders were shrunken. Apparently, this family divided into two branches early. Some founded Mesopotamia/ Babylon (notably, King Nimrod) and others founded Ethiopia.

Beside the Cush (Ethiopia) in Africa, the Bible definitely speaks of Cushites in Asia. Cush was the father of the biblical Nimrod mentioned in the “Table of Nations” in Genesis 10:6 and I Chronicles 1:8.

B. Mizraim– Egyptians. Misr is the Hebrew and Aramaic name for Egypt

C. Phut – Sometimes called PUT or PUNT. The Land of Punt, also called Pwenet or Pwene by the ancient Egyptians. Punt was an ancient kingdom – founder of Lydia and modern-day Somalia- Somalians.

D. Canaan – All the Ites people in the Bible who descended from Canaan. Canaanites are believed to be the first people in Israel. Before the construction of the Suez Canal, the entire eastern coast of the Mediterranean was a single land mass, adjoining Africa. Canaan was East Africa, later known in modern times as Palestine and Israel.

2. The Bible has historical events, such as wars, that have been proven to be true: The brothers helped each other fight as describe in Jeremiah and other chapters – Jeremiah 46:9 Charge, you horses! Drive furiously, you charioteers! March on, you warriors-men of Cush and Put who carry shields, men of Lydia who draw the bow. (They march out of Egypt, arranged in their divisions; cavalry, chariots, and infantry to begin the campaign.)

The forty-sixth chapter contains two prophecies concerning it: one was the discomfiture of Pharaoh Necho at Carchemish by Nebuchadnezzar.

Nahum 3:9 Ethiopia and Egypt were her strength, and it was infinite; Put and Lubim were thy helpers.

2 Chonicles12:2-4 In the fifth year of Rehoboam’s reign, because they had been unfaithful to the LORD, Shishak king of Egypt came up and attacked Jerusalem 3with 1,200 chariots, 60,000horsemen, and countless troops who came with him out of Egypt— Libyans, Sukkites, and Cushites. 4He captured the fortified cities of Judah and came as far as Jerusalem.…

Ezekiel 25-32 consists of prophecies against nations.

Ezekiel 30:5 states: Ethiopia, and Libya, and Lydia — (The names in Hebrew are Cush, Phut, and Lud, which are mentioned together as the Egyptian allies), and the people of the covenant land will fall by the sword along with Egypt.

Ludim –, an African nation descended from Egypt (Mizraim);Mizraite people or tribe descended from Ludim the son of Mizraim; also called Lydians. It is probable that the Ludim were settled to the west of Egypt, perhaps farther than any other Mizraite tribe. Lud and the Ludim are mentioned in four passages of the prophets –

Nubians were the elite soldiers of Ancient Egypt. The Medjay became part of the Ancient Egyptian military as scouts.

“We have come to serve Pharaoh”: A study of the Medjay and Pangrave as an ethnic group and as mercenaries from c. 2300 BCE until c. 1050 BCE

Count Volney was a white scholar and Egyptologist of the 19th century. He said Egypt was started by black Africans. The Sphinx of Giza — Its Nose, Lips, Gender, and Ethnicity — www.SphinxOfGiza.com

Egypt was originally a colony of Nubia (Kush or Cush) but eventually separated from Nubia and became independent and even stronger than them. In ancient times the border of southern (or “Upper”) Egypt was much further south than where it is today. Upper Egypt in ancient times extended well into what is now the country of Sudan (known in ancient times as Nubia or Kush). Tribes could easily migrate through the dessert of Sudan because The Nile river ran through it.

4. The Nubian origin of Egyptian civilization is supported by the discovery of artifacts by archaeologists from the Oriental Institute at Qustul. One example: On a stone incense burner found at Qustul we find a palace facade, a crowned King sitting on a throne in a boat, with a royal standard placed before the King and hovering above him, the falcon god Horus. The white crown on this Qustul king was later worn by the rulers of Upper Egypt.

Fascinated by ancient history and genetics

The Middle East was the mother of ancient Egypt going back 30 000 years.

The oldest modern human found in Egypt and dated 37 000 years, was a Eurasian in origin:

Copts who are the closest descendants of the ancient Egyptians are more closely related to peoples of the Levant going back thousands of years:

Modern Copts look just like their ancient ancestors and peoples of the Levant:

Modern Lebanese are the descendants of the ancient Canaanites and resemble the Copts:

And first settled in Egypt not ethiopea

Archeogenetic evidences says that Egypt was once a land of pure Caucasoid hamites who came from Mesopotamia there had splitting groups that migrated to libya and Ethiopia the people of Ethiopia now are mulatto and are not representative of the original hamites.

Who are the copts and berbers.

Simply becouse it is not true! ancient Egypt was almost a pure egyptian civilization, give one egyptian monument, AR any other evidence of egyptian origin that exists below Sudan?! None. Or any archeological, historical theories suggest so.